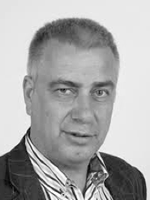 Gijsbertus (Bert) van der Horst received his PhD in Biology at the Erasmus University Rotterdam where he studied the lysosomal enzyme sialidase. As a postdoctoral fellow (Department of Genetics, Erasmus MC) he has generated and characterised animal models for DNA repair disorders (e.g. Cockayne syndrome), DNA repair genes (e.g. mHR23A and mHR23B, the base excision repair gene mNTH1), as well as the photolyase-like genes mCry1 and mCry2. The mCry genes were shown to encode indispensable components of the biological clock, a major breakthrough in the field of chronobiology. For the latter work he received a ZonMW Vici award that stood at the basis of a new research line in the department, focussing on the molecular mechanism and biological impact of the circadian system. Another research line in his group focuses on the relation between defective DNA repair and UV- and chemically induced carcinogenesis, as well as (premature) aging.